I am aiming to create a knitted artifact and a pattern for it, so that others can recreate it. I am not sketching and testing the pattern (written instructions), as I need to make the alpha prototype first, and then write it up.

My aim is to create a small light modern looking (even funky) hat that can be quickly put on and off, as weather here is changing quickly, to protect me from light rain and wind when needed. I’m absent-minded, and loose small objects (gloves, sunglasses, umbrellas etc) quickly, as I forget them where I put them down. So I wanted a model that would prevent me from loosing the hat, as I will be taking it off often.

Out of 10 ideas generated in Week 3 of this course, I have identified 2, and created prototypes for them in Week 4.

I have tested my prototypes in the following way. I have turned to an on-line knitting community Ravelry, asking other knitters which hat they would test-knit (get the pattern for free ahead of it being available publicly, knit it and provide me with feedback on the item and on how clear are the instructions) and which pattern they would buy.

I got responses from several people, and voices have divided evenly between two prototypes. I it’s clear that the two variants suite different needs. While option C is a scarf AND a hat, J is EITHER a scarf OR a hat. It’s also much quicker and easier to make. I will definitely pursue J later on, but for the purposes of this course I will work on option C. I have made some refinements to the idea, based on feedback from my test, and from thinking over what I personally prefer. And it will be effectively a cross-over between C and G. Here’s a picture with annotations (click to enlarge): 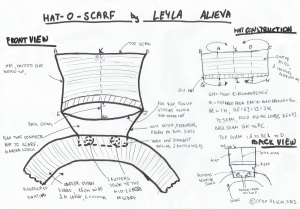